Bela Lugosi and his co-star, Shirley Grey, arrived in England aboard the SS Berengaria on July 12, 1935 to begin filming of Hammer Productions’ Mystery of the Mary Celeste. On July 25th, while the pair were busy filming on location off the coast of Falmouth, the British magazine Film Weekly printed a one-page article attributed to Bela. 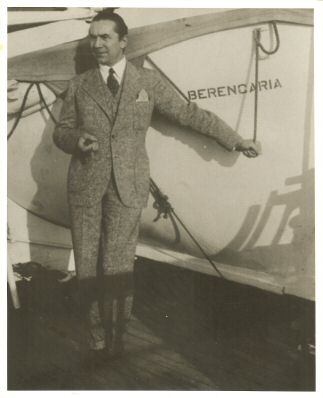 Bela enroute to England aboard the  SS Berengaria

I Like Horror Parts was probably actually concocted by Universal’s publicity department to help plug the latest Karloff and Lugosi vehicle, The Raven. Although Bela had aided their efforts by making personal appearances at the New York premiere of The Raven at the Roxy Theatre on July 4th, for which he delayed his voyage to England, and at the trade show screening at the Prince Edward Theatre in London on the 16th, he attempted to distance himself from horror roles in interviews with the British press. He was hoping that his dramatic role in Mystery of the Mary Celeste would help him to escape from the typecasting which had dogged him since starring in Dracula four years previously.

The article, which appeared on page 11, contains several points of interest. Firstly, the introduction stated that Bela was in England to play not only in Mystery of the Mary Celeste, but also Dr. Nikola, a British film project which, along with Embassy Films’ Vampire of the Sky and Concordia Films’ remake of The Cabinet of Dr Caligari, failed to materialise .

Advertisement for Bela’s personal appearance at the trade show screening of The Raven at the Prince Edward Theatre in London on July 16th, 1935

Secondly, in a defiant, but ineffectual response to the then current backlash in the UK against what was perceived as the corrupting influential of horror films, the writer predicted that films with “fantastic or supernatural characters” would continue to be made whatever happened to the “horror “cycle” of pictures.” Pressure was mounting from religious and civic groups and their powerful allies in the press and local government, for stronger film censorship. An avid newspaper reader, Bela must have been aware that The Raven and horror films in general were drawing strong condemnation during his stay in Britain.

If he did indeed write the article, Bela would shortly be ruing his decision to “deliberately” specialise in horror characters and his firm belief that “there will be suitable roles for me for a long time to come.” The combined effects of the strenuous  implementation of a “Horrific” category for films in the UK from January 1936, banning anyone under the age of 16 and causing a big loss of revenue for the Hollywood studios, and the loss of control of Universal by the Laemmles in March 1936 resulted in a cessation of horror output in American, leaving the all but unemployed actor facing financial ruin. 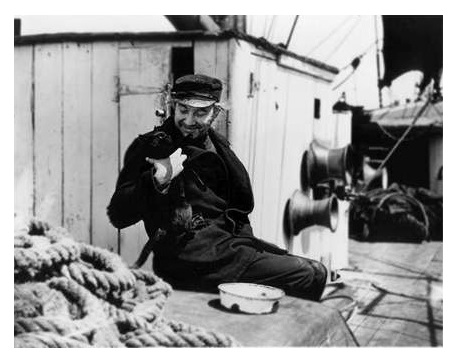 While Bela filmed off the coast of Falmouth, the battle for stronger censorship of horror films raged across the country.

The screen “Dracula,” who has come to England to play in “The Mystery of the Marie Celeste” and “Dr. Nikola,” explains in this exclusive article why he not only likes but actually prefers horror parts to all others.

I like playing “horror” parts on the screen. This may surprise you, but let me explain my point of view. There is a popular idea that portraying a monster of the Dracula type requires no acting ability. People are apt to think that anyone who likes to put on a grotesque make-up can be a fiend. That is wrong.

A monster, to be convincing, must have a character and a brain.

The screen monster produced by mere tricks of make-up and lighting will never thrill an audience. It will make them laugh! It is just a machine which does not understand what it is doing.

Now, imagine this creature with a character, with reasoning power and certain human mental facilities. It is no longer a machine. It can think.

Such a monster is able to thrill an audience. It can plot against the hero and heroine. It is a menace which must be combated by brains, not by running away.

We are all more afraid of cunning than brute force. Therefore, the monster must have cunning to trap his victims – physical strength is not enough to convince an audience.

Now, perhaps, you begin to see why I find the playing of fiends interesting!

When I am given a new role in a horror film, I have a character to create just as much as if I were playing a straight part.

Whether one thinks of films like Dracula as “hokum” or not does not alter the fact; the horror actor must believe in his part. The player who portrays a film monster with his tongue in his cheek is doomed to failure.

An example of this occurred not very long ago. An actor, whose name I will not mention, played the part of a sinister foreign villain. He had been used to straight parts, and he went into this film laughing at himself. He did the correct villainous actions, but he had his tongue in his cheek all the time.

The villain was completely unconvincing and as a result the film was a flop at the box office. Later, an almost exactly similar character was played by another actor. He took it seriously. Audiences believed tin the villain and the film was a success.

I am not saying that I personally take seriously these vampires and monsters as such. I am saying that one must take them seriously when one is portraying them.

In playing Dracula, I have to work myself up into believing that he is real, to ascribe to myself the motives and emotions that such a character would feel. For a time, I become Dracula — not merely an actor playing at being a vampire.

A good actor will “make” a horror part. He will build up the character until it convinces him and he is carried away by it.

There are, of course, plenty of tricks of the trade to be employed, such as effective make-up, clever photography, a threatening voice and claw-like gestures with the hands. These are important in the “hokum” film and must be used. But even they must be employed with intelligence or they will fail to thrill.

To leave the theoretical discussion of so-called monsters, there is another reason why I do not mind being “typed” in eerie thrillers.

With few exceptions, there are, among actors, only two types who matter at the box office. They are heroes and villains. The men who play these parts are the only ones whose names you will see in electric lights outside the theater.

Obviously, I cannot play a juvenile part — you will not find me competing with Clark Gable or Robert Montgomery! Therefore, I have gone to the other extreme in my search for success and public acclaim.

Every year a number of films with fantastic or supernatural characters are made, and will, it seems, continue to be made, whatever may happen to the horror “cycle” of pictures. I have deliberately specialized in such characters — and I firmly believe there will be suitable roles for me for a long time to come!

Mystery of the Mary Celeste recalled by George Mozart

Mystery Of The Mary Celeste