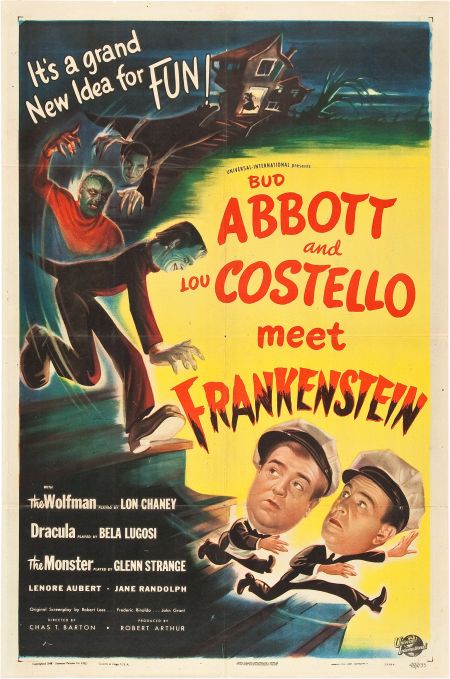 Bela Lugosi swears Brain of Frankenstein will be his last horror picture; but he will have  one more fling at Dracula on the London stage. Then, of all things, he will do four weeks of Harvey. That can only be matched by Boris Karloff, another horror man, who did kindly old Gramps in On Borrowed Time last year.

Hollywood, Feb. 28—(INS)—The king of screen goons, Lon Chaney, Jr., plans to invest some of his own money in his next horror pictures.

What’s more, he’s thought up two new fiendish delights to scare the wits out of his fans.

He isn’t saying yet what form the new monsters will take, but he ought to know what he’s doing. Lon is the only goon man who has played them all, Wolf Man, Frankenstein’s Monster, Dracula, the Mummy and all the rest.

I talked to Lon at Universal-International. He’s currently playing The Wolf Man in Brain of Frankenstein, which is a combination horror and comedy, what with Abbott & Costello, Bela Lugosi as Dracula and Glenn Strange as Frankenstein’s Monster.

“I’ve been doing these goon roles for 17 years,” Lon said, “The fans who like them, and there are lots of them, line up at the theatres in as big numbers as they ever did.”

“That’s why I’m anxious to get a piece of my own money into a couple of productions. It’s a good investment.”

Lon conceded that the good make-ups are tough on a man.

“I have a new Wolf Man outfit which I can get on in two hours, which is a big break,” he said, “Up to this picture it used to take me six hours. I’d have to get to the studio at 3 am.

“Monster” Strange, who had been discussing fishing with “Dracula” spoke up:

“It sure is hard work. I was so tired when I got home last night I slept 12 hours. Generally I wake up two or three times during the night and walk around the house.”

Hollywood, Feb. 3—(AP)—Two of the screen’s ablest boogeymen, Bela Lugosi and Lon Chaney, are planning projects to satisfy the most eager horror fans.

Both are currently scaring the wits out of Abbott & Costello in Abbott & Costello Meet Frankenstein, and Lugosi reports that Universal-International is mulling two subjects based on his Dracula portrayal. “There is enough material in the original novel for half a dozen pictures,” the Hungarian actor told me. Meanwhile, he plans to take the famed blood-sucker to London for an eight-week stage run this summer.

Chaney is organizing his own producing company with Curt Siodmak, top writer of gruesome scripts. They plan to create new characters “more horrible than any yet seen on the screen.” I can hardly wait.

Universal-International, long the home of spectral entertainment attained a chimerical crescendo in recent weeks with an incarnation of Venus, a mermaid, Frankenstein’s monster, Dracula, The Wolf Man, and The Invisible Man all working at once. The majority of these loveable characters are concentrated in Abbott & Costello Meet Frankenstein, a film described by the studio as a comedy. Glen Strange is playing both The Monster and The Invisible Man, since, in the first characterization he need only be visible and in the second, only audible. Lon Chaney, Jr. has resumed his old mantle as the studio’s lycanthrope and will climax the drama by battling to the death with the monstrous Mr. Strange.

Bela Lugosi, the perpetual Dracula, disclosed last week, that he is to be revived for his new appearance by one of the unwary comedians who is foolish enough to pull an oaken state out of his heart. Mr. Lugosi, who was scrambling on the floor of his dressing room for a missing shirt stud at the time, commented that he was relieved that Universal had not asked him to do anything unbecoming to Dracula’s dignity in the association with Abbott & Costello. “There is no burlesque for me,” he said. “All I have to do is frighten the boys, a perfectly appropriate activity. My trademark will be unblemished.” He will not be permitted to sink his teeth in anyone’s jugular vein in the comedy; and will have to content himself with hypnotizing a girl and transforming himself into a bat from time to time. 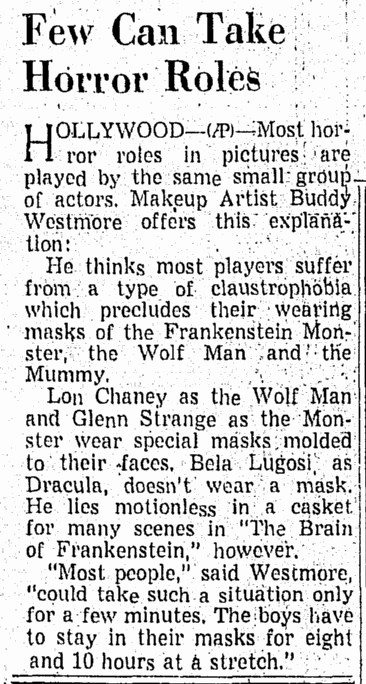 Most of the comic invention in “Abbott and Costello Meet Frankenstein” is embraced in the idea and the title. The notion of having these two clowns run afoul of the famous screen monster is a good laugh in itself. But take this gentle warning: get the most out of that one laugh while you can, because the picture, at Loew’s Criterion, does not contain many more.

That is to say, the situations which the wags at Universal have contrived for their two untiring comedians in this assembly-line comedy are the obvious complications that would occur in a house of horrors. Costello, the roly-poly and completely susceptible one, shudders and shakes in standard terror to behold the assembly of ghouls—which includes not only the monster but Count Dracula and the Wolfman. Abbott, prevented from seeing the creatures until near the end, scoffs and snorts at his partner from behaving so curiously. After a thorough exhaustion of this play on frustration and fright, the story is brought to a climax with the intended transference of a brain. Whose brain is tagged for what monster we leave you to surmise.

During filming of Abbott & Costello Meet Frankenstein, Wolf Man Chaney, Dracula Lugosi and Monster Strange were barred from the studio commissary during meal times because too many plates of food were returned to the kitchen.

When the new picture started, they all went to the restaurant together, walked in casually, sat down for lunch.

“We looked around and saw women turn green, full forks descend from mouths and waitresses practically spilled their trays of food,” Chaney said. “At first it made us feel self-conscious, but then it became a joke, and we’d do it just to see the reaction.”

However, studio heads—possibly considering the world food situation as well as the welfare of studio workers—decided the “terrible trio” had to eat in their dressing rooms until production was finished. 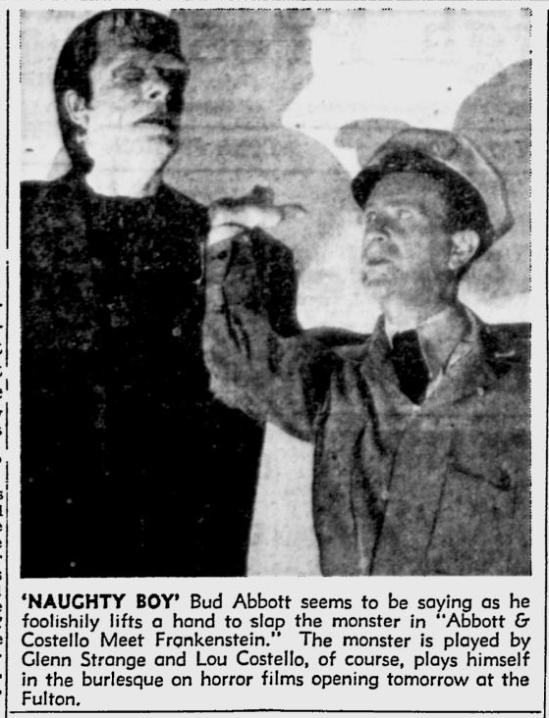 Universal International: rumors that UI are faced with financial difficulties, direct, is traceable to the tendancy of the studio for the experiment using the product of so-called “class”. Sales staff would prefer the image of some of the “money” for many of the masses definitely. “Abbott and Costello Meet Frankenstein” will probably outside gross elegant “Mr. Peabody and the Mermaid“. Maybe a change in studio management is in order! 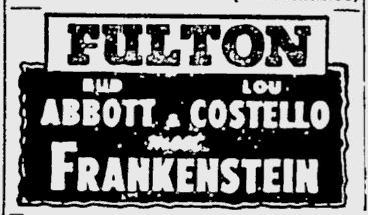 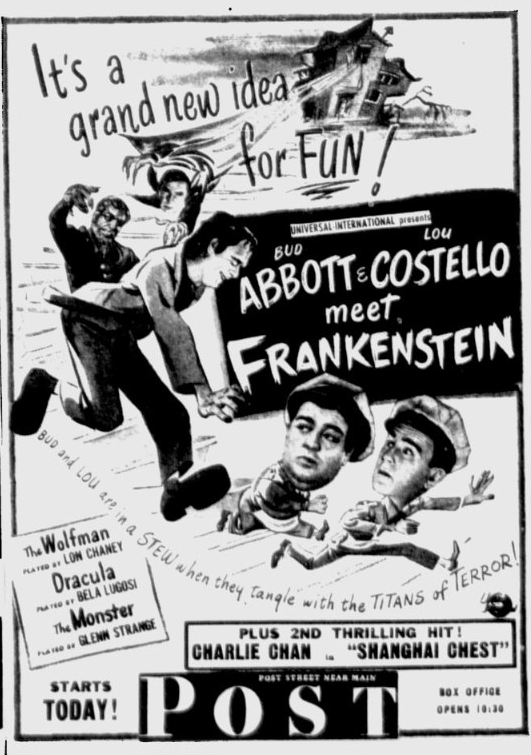 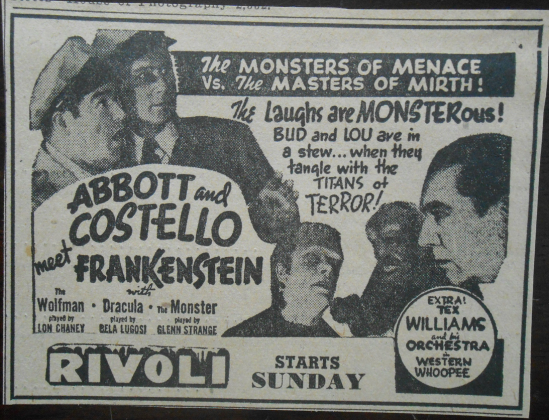 The Cameron Herald and Centinel, November 4, 1948 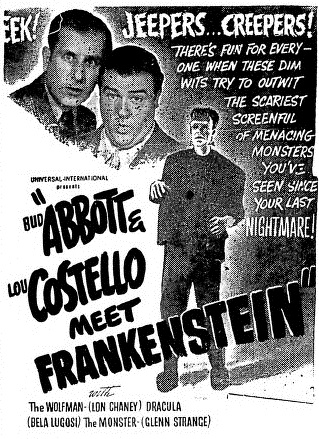 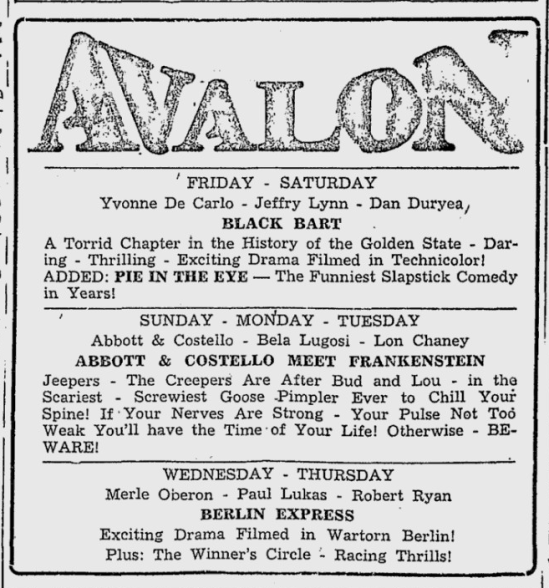 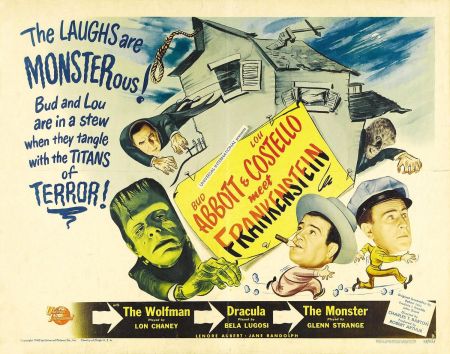 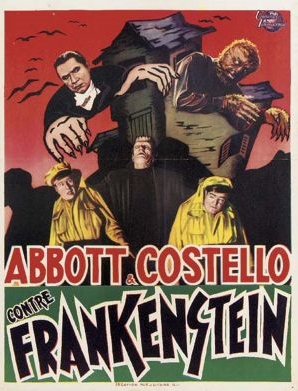 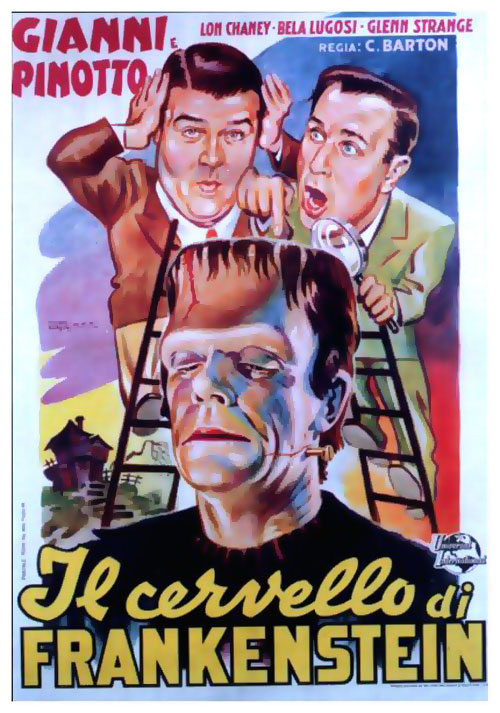 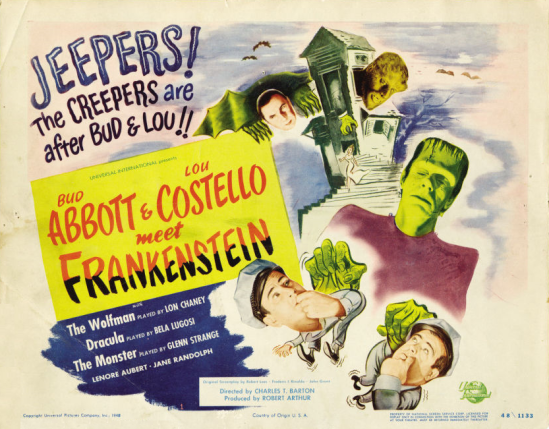 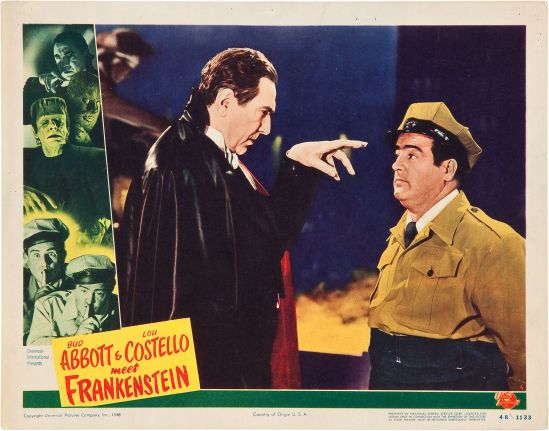 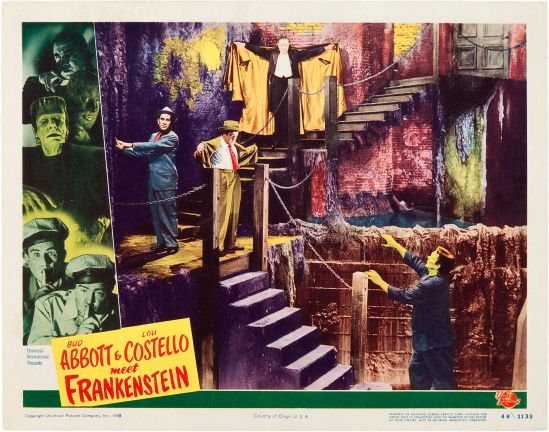 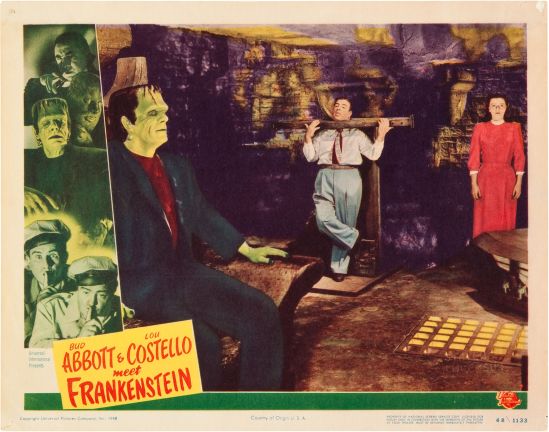 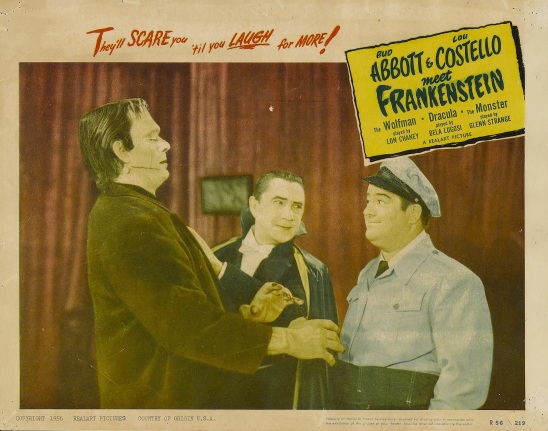 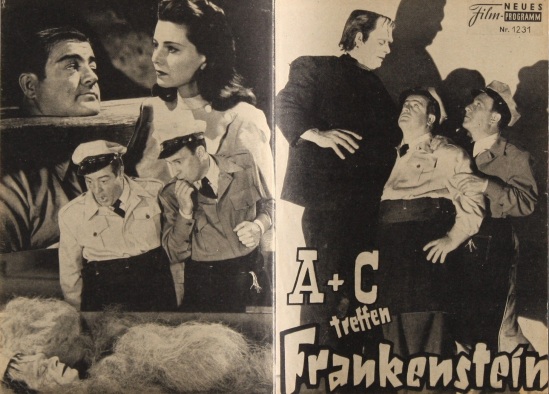 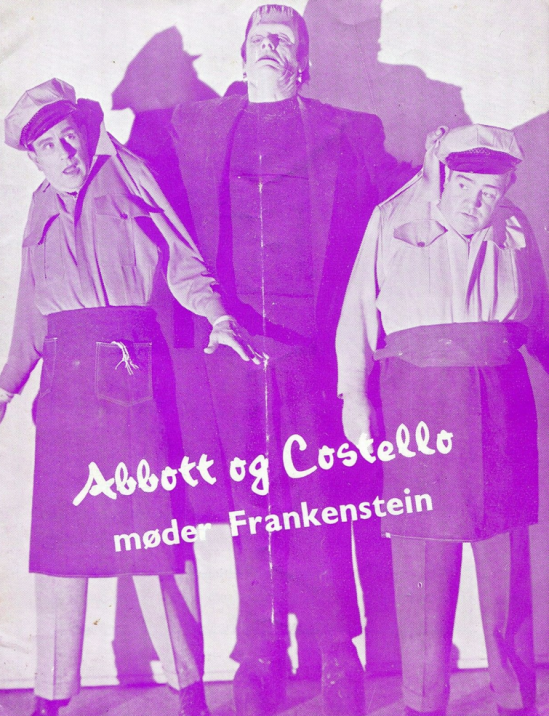 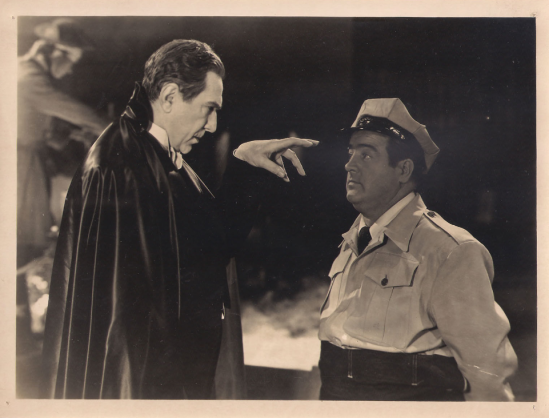 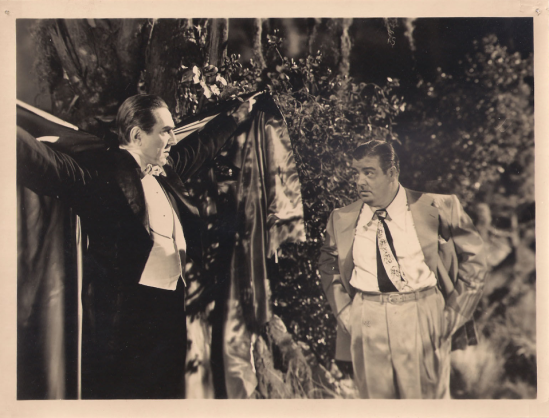 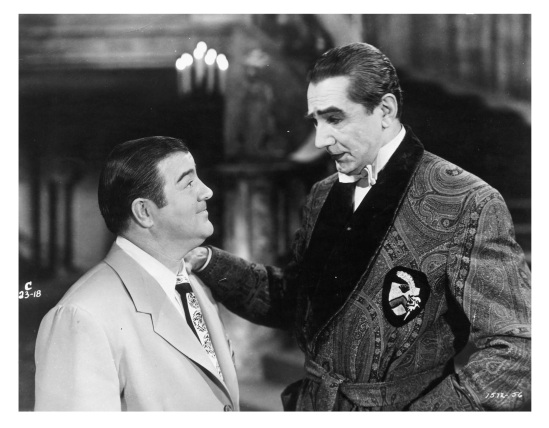 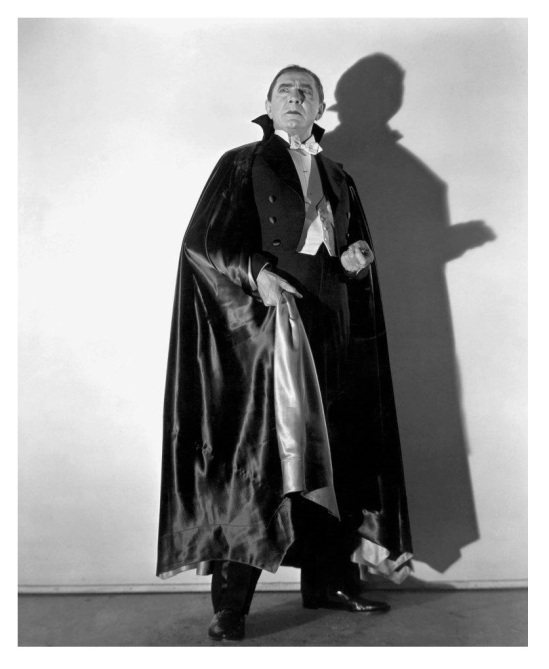 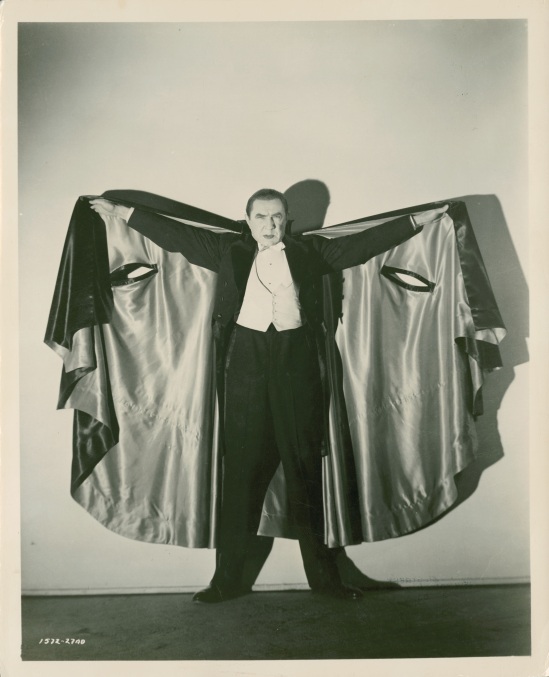 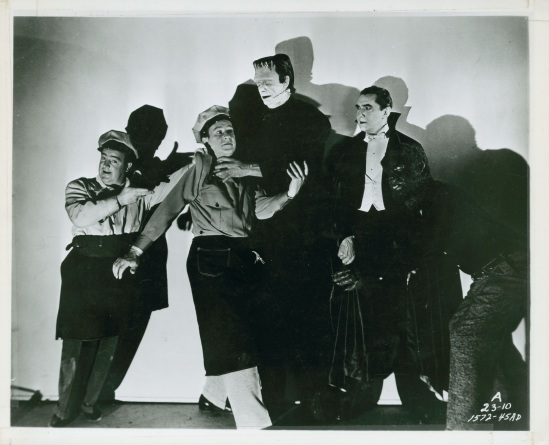 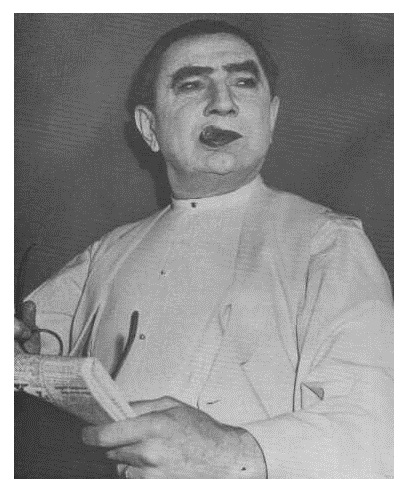