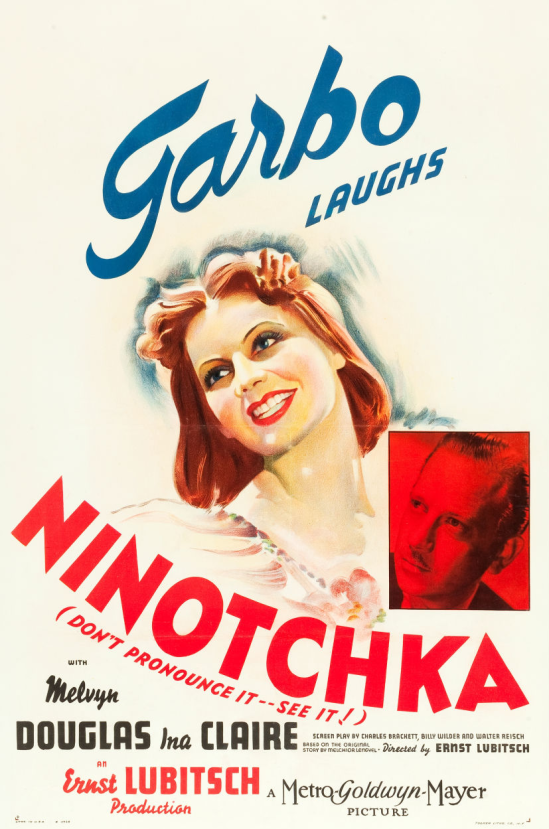 Selection of Ernst Lubitsch to pilot Garbo in her first light performance in pictures proves a bull’s-eye.

The punchy and humorous jabs directed at the Russian political system and representatives, and the contrast of bolshevik receptiveness to capitalistic luxuries and customs, are displayed in farcical vein, but there still remains the serious intent of comparisons between the political systems in the background [based on an original story by Melchior Lengyel].

Three Russian trade representatives arrive in Paris to dispose of royal jewels ‘legally confiscated’. Playboy Melvyn Douglas is intent on cutting himself in for part of the jewel sale. Tying up the gems in lawsuit for former owner, Ina Claire, Douglas is confronted by special envoy Garbo who arrives to speed the transactions. Douglas gets romantic, while Garbo treats love as a biological problem. 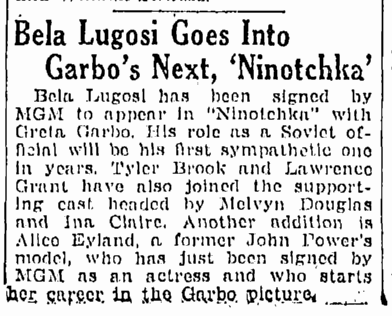 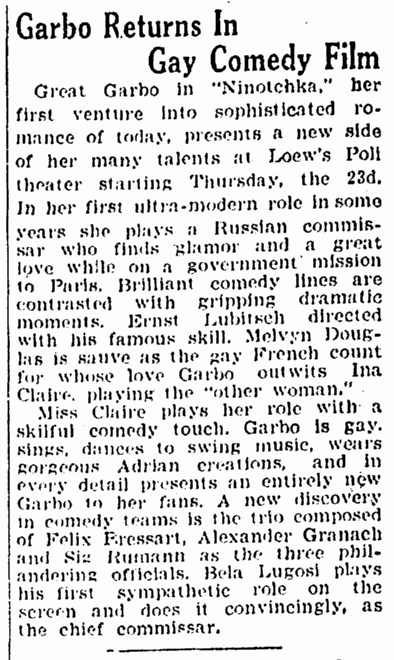 THE SCREEN IN REVIEW

Lubitsch, Opens at the Music Hall

Stalin won’t like it. Molotoff may even recall his envoy from Metro-Goldwyn-Mayer. We still will say Garbo’s “Ninotchka” is one of the sprightliest comedies of the year, a gay and impertinent and malicious show which never pulls its punch lines (no matter how far below the belt they may land) and finds the screen’s austere first lady of drama playing a dead-pan comedy role with the assurance of a Buster Keaton. Nothing quite so astonishing has come to the Music Hall since the Rockefellers landed on Fiftieth Street. And not even the Rockefellers could have imagined M-G-M getting a laugh out of Garbo at the U.S.S.R.’s expense.

Ernst Lubitsch, who directed it, finally has brought the screen around to a humorist’s view of those sober-sided folk who have read Marx but never the funny page, who refuse to employ the word “love” to describe an elementary chemico-biological process, who reduce a Spring morning to an item in a weather chart and who never, never drink champagne without reminding its buyer that goat’s milk is richer in vitamins. In poking a derisive finger into these sobersides, Mr. Lubitsch hasn’t been entirely honest. But, then, what humorist is? He has created, instead, an amusing panel of caricatures, has read them a jocular script, has expressed—through it all—the philosophy that people are much the same wherever you find them and decent enough at heart. What more could any one ask?

Certainly we ask for little more, in the way of thoroughly entertaining screen fare, than the tale of his Ninotchka, the flat-heeled, Five-Year-Plannish, unromantically mannish comrade who was sent to Paris by her commissar to take over the duties of a comically floundering three-man mission entrusted with the sale of the former Duchess Swana’s court jewels. Paris in the Spring being what it is and Melvyn Douglas, as an insidious capitalistic meddler, being what he is, Comrade Ninotchka so far forgot Marx, in Mr. Lubitsch’s fable, as to buy a completely frivolous hat, to fall in love and, after her retreat to Moscow, to march in the May Day parade without caring much whether she was in step or not.

If that seems a dullish way of phrasing it, we can only take refuge in the adventitious Chinese argument that one picture is worth a million words. Mr. Lubitsch’s picture is worth at least a few thousand more words than we have room for here. To do justice to it we should have to spend a few hundred describing the arrival of the Soviet delegation in Paris where they debate the merits of the Hotel Terminus (a shoddy place) and the Hotel Clarence where one need push a button once for hot water, twice for a waiter, thrice for a French maid. Would Lenin really have said, as Comrade Kopalski insisted, “Buljanoff, don’t be a fool! Go in there and ring three times.”

We should need a few hundred more to describe the Paris tour of Ninotchka, under Mr. Douglas’s stunned capitalistic guidance; the typically Lubitsch treatment of a stag dinner party, with the camera focussed on a door and only the microphone capable of distinguishing between the arrival of a cold meat platter and that of three cigarette girls on the hoof; the Moscow roommate’s elaboration of the effect of a laundered Parisian chemise upon the becottoned feminine population of an entirely too-cooperative apartment house.

For these are matters so cinematic, so strictly limited to the screen, that news print cannot be expected to do justice to them, any more than it could do full justice to Miss Garbo’s delightful debut as a comedienne. It must be monotonous, this superb rightness of Garbo’s playing. We almost wish she would handle a scene badly once in a while just to provide us with an opportunity to show we are not a member of a fan club. But she remains infallible and Garbo, always exactly what the situation demands, always as fine as her script and director permit her to be. We did not like her “drunk” scene here, but, in disliking it, we knew it was the writer’s fault and Mr. Lubitsch’s. They made her carry it too far.

We objected, out of charity, to some of the lines in the script: to that when Ninotchka reports: “The last mass trials were a great success. There are going to be fewer but better Russians”; and to that when the passport official assures the worried traveler she need not fret about the towel situation in Moscow hotels because “we change the towel every week.” But that is almost all. The comedy, through Mr. Douglas’s debonair performance and those of Ina Claire as the duchess and Sig Rumann, Felix Bressart and Alexander Grannach as the unholy three emissaries; through Mr. Lubitsch’s facile direction; and through the cleverly written script of Walter Reisch, Charles Brackett and Billy Wilder, has come off brilliantly. Stalin, we repeat, won’t like it; but, unless your tastes hew too closely to the party line, we think you will, immensely.
NINOTCHKA, adapted by Charles Brackett, Billy Wilder and Walter Reisch from an original screen story by Melchior Lengyel; directed by Ernst Lubitsch for Metro-Goldwyn-Mayer. At the Radio City Music Hall.
Ninotchka . . . . . Greta Garbo
Count Leon d’Algout . . . . . Melvyn Douglas
Duchess Swana . . . . . Ina Claire
Iranoff . . . . . Sig Rumann
Buljanoff . . . . . Felix Bressart
Kopalski . . . . . Alexander Granach
Commissar Razinin . . . . . Bela Lugosi
Count Rakonin . . . . . Gregory Gaye
Hotel Manager . . . . . Rolfe Sedan
Mercier . . . . . Edwin Maxwell
Gaston . . . . . Richard Carle 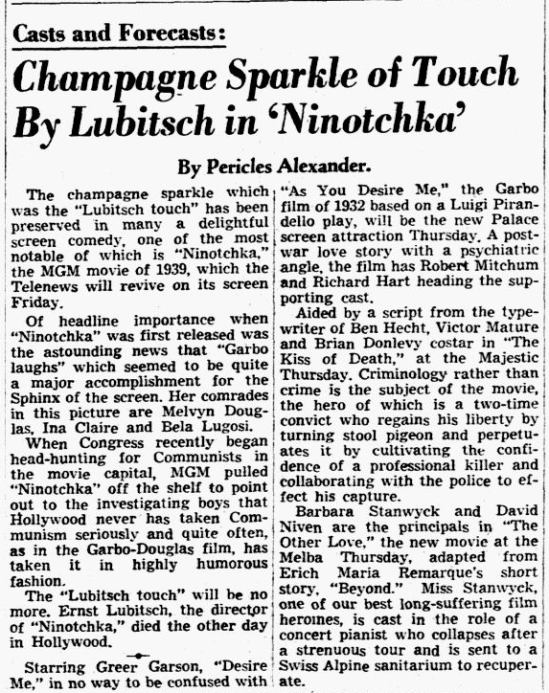 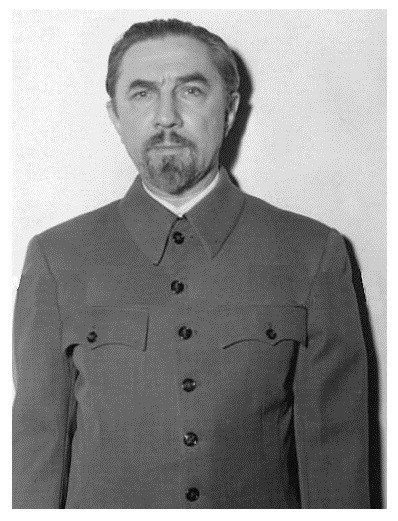