Bela Lugosi plays a jealous ex-husband in this all-star comedy set in the International House Hotel in Wu Hu, China, where a Chinese inventor is trying to sell his television-like invention, the radioscope. Lugosi, who had filed for bankruptcy in October, 1932, was filming International House at Paramount during the day and Night of Terror at Columbia through the night as he tried to work his way out of debt.

Cab Callowy and His Orchestra: Themselves 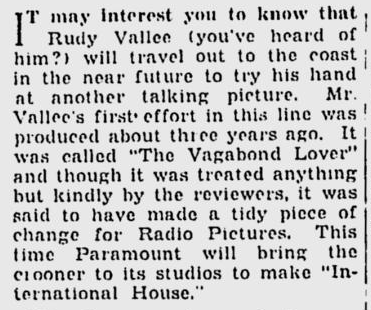 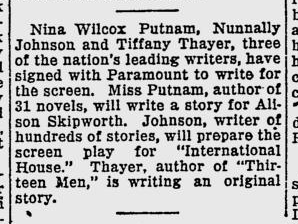 Bela Lugosi was signed yesterday by Paramount for the third leading role in “International House,” which Eddie Sutherland is directing. The Sugarman-Delaney office negotiated for the player. 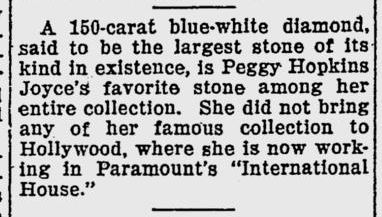 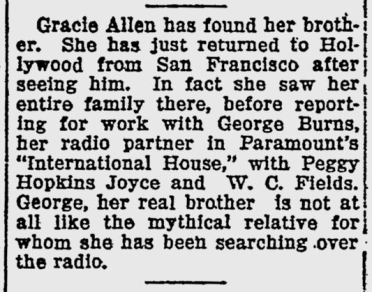 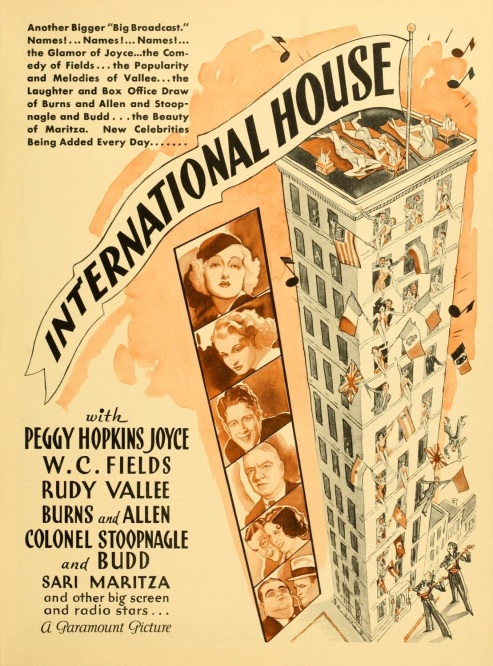 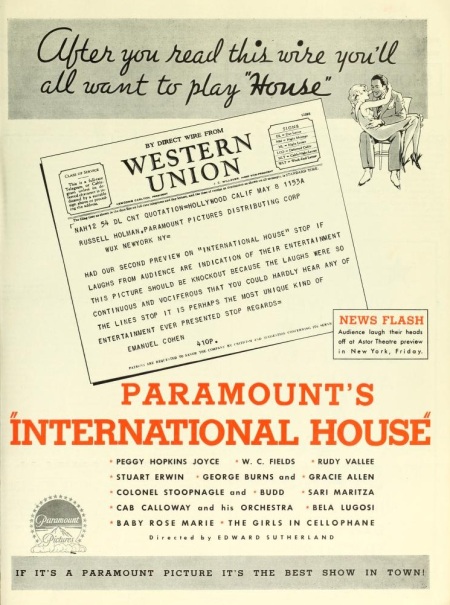 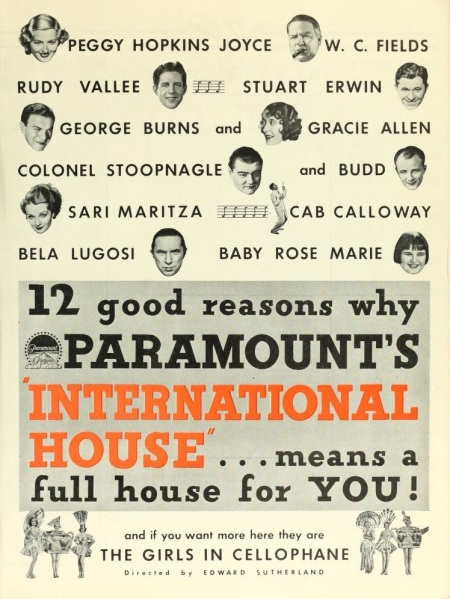 At the Paramount they are dispensing humor by the shot-gun method, and it should be said at once that “International House” has some direct hits. In a mad scenario the new film finds a generous amount of space for such diverse comics as W. C. Fields, Stuart Erwin, Burns and Allen and Stoopnagle and Budd, with a corner for Peggy Hopkins Joyce to dig gold in. Measured in laughs, this potpourri of unrelated talents is surprisingly good. A Chinese of questionable genius brings most of the cast to the “International House” with his announcement of an invention which combines the best features of the radio and television. Bela Lugosi, with the sinister eyes, is on hand to represent Russia at the demonstration. Mr. Erwin, acting for an American company, has a talent for catching childhood diseases, and when he comes down with the measles the “International House” is quarantined. George Burns and Gracie Allen are the house doctor and nurse, occupations which let them run through their hilarious dialogue at any given moment. How W. C. Fields, whose destination is Kansas City, finds his way into this lunatic ménage in a helicopter is something that cannot possibly matter after the picture has started on its unsteady course. With his regal and somewhat beery manner, his precious silk hat, his frozen face and his unlit cigar, he keeps his audiences in perpetual roars. His athletic argument with the hotel clerk, which brings most of the “International House” thundering about his ears, is the funniest thing in the picture, unless it be his clandestine rendezvous with Miss Joyce in her boudoir. Doctor Wong’s demonstrations of his great invention permit the introduction of such radio entertainers as Rudy Vallee, Cab Galloway and Baby Rose Marie. To Mr. Vallee falls the only really inept episode in “International House,” and that is the fault of the script. Although the writing is uneven, a great deal of it is funny, and it is of particular help to Mr. Fields and to Burns and Allen. Showboat. Gauged by the amount of applause and the chuckles from the audience the Paramount can boast of one of its best stage presentations. In a showboat setting the headliners, Ray Bolger and Gus Van, display their versatility. Mr. Bolger as usual holds the attention by his ingenuity, especially when giving his terpsichorean satire of Rubinstein’s “Melody in F,” while Mr. Van, once teamed with the late Joe Schenck, captures his share of honors with several character songs. The remainder of the bill comprises entertainers of unusual calibre. Among them are Helen Lynd, who impersonates Maurice Chevalier, Zasu Pitts and Mae West; Ann Judy and Zeke, in a hill-billy turn; Pop and Louis, two talented young tap dancers; the Buccaneers, and the Lucas Octet. The entire presentation has been staged by R. H. Burnside. INTERNATIONAL HOUSE, based on a story by Lou Heifetz and Neil Brant; music and lyrics by Ralph Rainger and Leo Robin; directed by Edward Sutherland; a Paramount production. At the Paramount.  Peggy Hopkins Joyce . . . . . Peggy Hopkins Joyce  Professor Quail . . . . . W. C. Field  Tommy Nash . . . . . Stuart Erwin  Carol Fortescue . . . . . Sari Maritza  Dr. Burns . . . . . George Burns  Nurse Allen . . . . . Gracie Allen  General Petronovich . . . . . Bela Lugosi  Dr. Wong . . . . . Edmund Breese  Sir Mortimer Fortescue . . . . . Lumsden Hare  Hotel manager . . . . . Franklin Pangborn  Herr von Baden . . . . . Harrison Greene 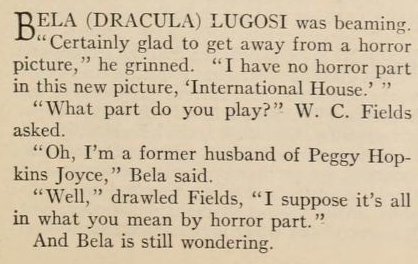 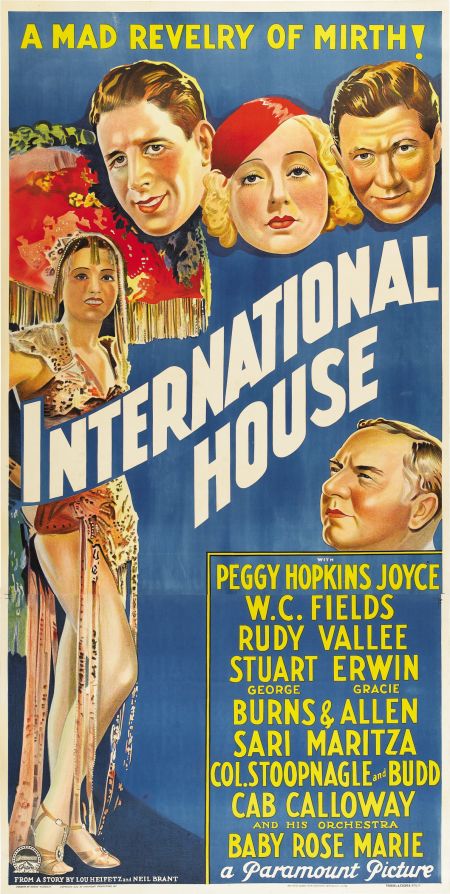 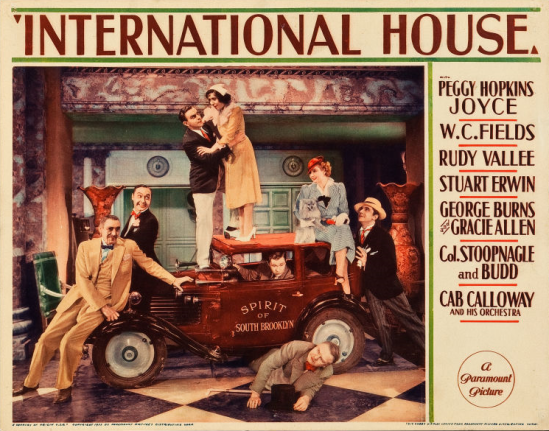 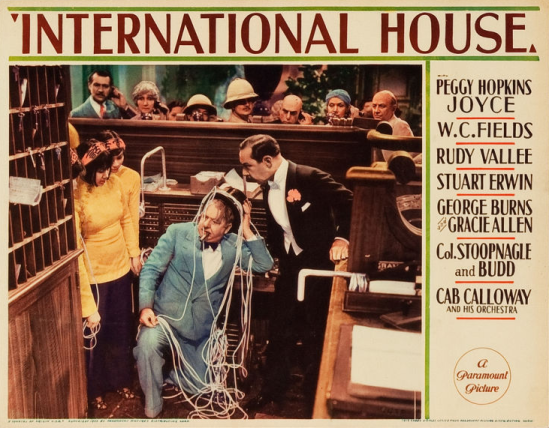 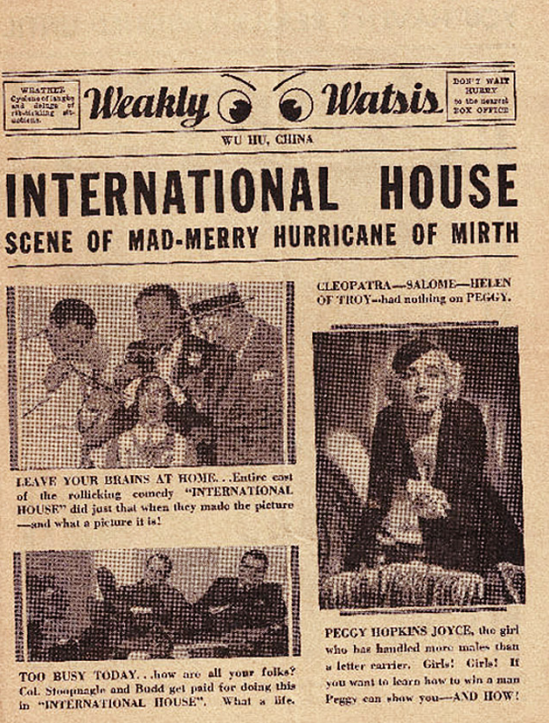 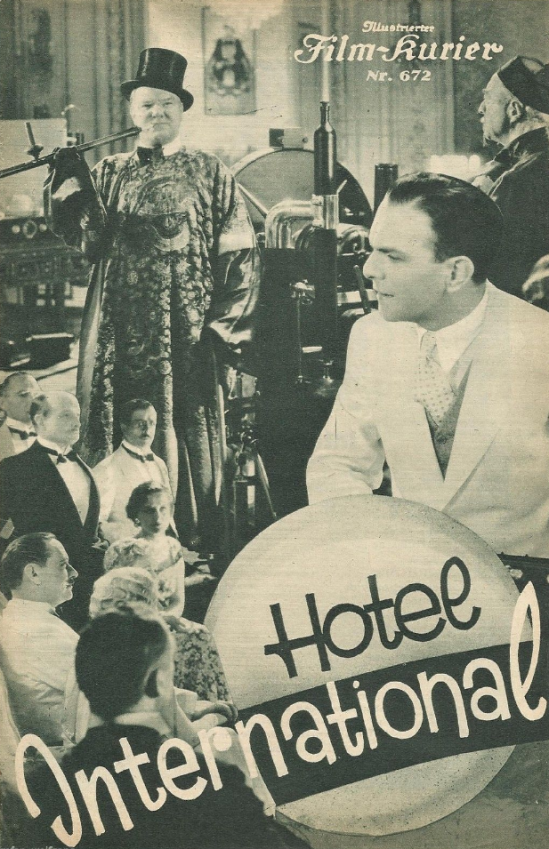 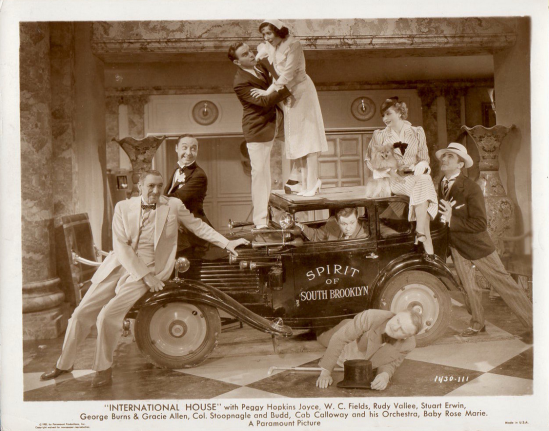 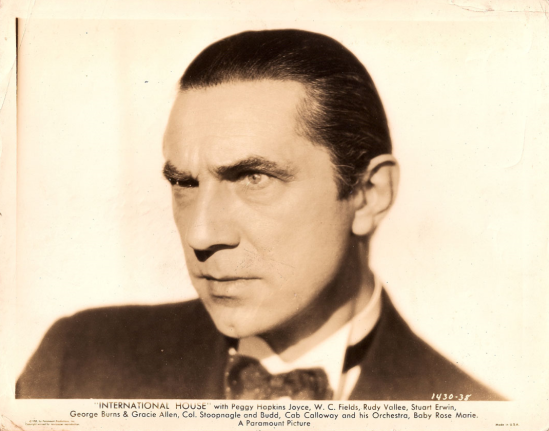 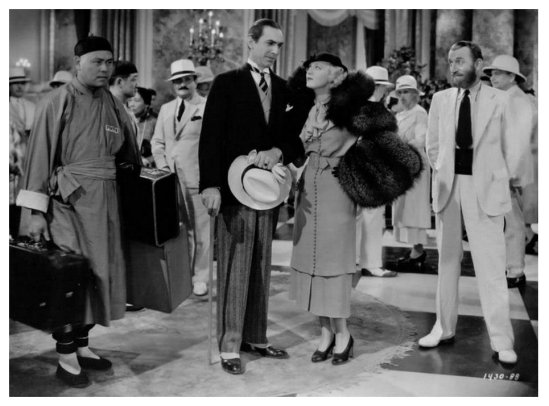 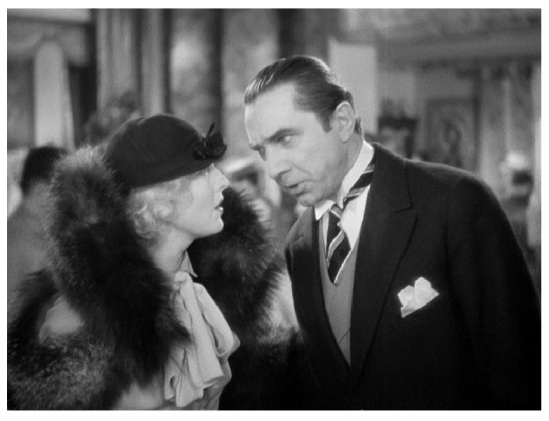